Inhabited since prehistoric times, the town of Cosne boasts a privileged place in history. In the Gallo-Roman period, it held a coveted position as a crossroads for waterways (the Loire and the Nohain) and land routes (Autun-Paris and Auxerre-Bourges). From the Celtic invaders to the time of industrial and commercial development, through power struggles and barbarian invasions, Cosne-Cours-sur-Loire has a rich past whose imprint is still visible today.

What a lovely spot to settle in, and what a perfect vantage point! This is what the Celtic invaders must have thought over 2,000 years BC when they established “Condate”, which would become Cosne, on the right bank of the Loire. Thanks to this combination of the river on one side and woods full of game on the other, the region was populated very early, in the Palaeolithic era. This is evidenced by objects made of flint, wood or deer antler found during excavations. In the Gallo-Roman period, Cosne gained in importance. Its strategic location on north-south and east-west routes, and on the Loire and Nohain waterways, makes it a favoured location for trade. But, alas, also for power struggles! After the barbarian invasions, the town came under the authority of the Bishop of Auxerre in the fifth century. He was confronted by the ambitions of the county of Nevers. This power struggle continued until the eleventh century. A crossing point for road and river routes, Cosne had a ringside seat despite itself for the major conflicts in the history of France: the Hundred Years War, the struggle between the Armagnacs and the Burgundians, the religious wars, the Fronde. It had to protect itself! The château was built in the fifth century, and the houses huddled around it. During the mediaeval period, in the ninth and tenth centuries, a first enclosure protected the town against intrusions by the Normans, and the Fraicte tower was built to monitor the Loire. 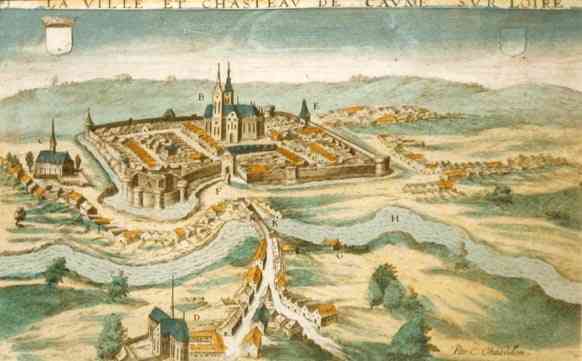 The era of prosperity

From the seventeenth century until the Revolution, Cosne developed rapidly. In particular, from 1670, the Manufacture des Forges de la Chaussade ironworks made the town a major centre of industrial production for the French navy (anchors and equipment). At the same time, agriculture and pottery factories were booming.

This was a time of growth: between the late seventeenth and the mid-nineteenth centuries, Cosne spread out along its main access roads. In 1833, the first bridge was built over the Loire. As it became an administrative, commercial and industrial centre, Cosne’s importance was marked by the construction of the railway line, the Town Hall, the Palace of Justice and the Sub-Prefecture under Napoleon III. The town was now famous for its cutlery and its file factories. From 1876 to 1939, Cosne was also a major garrison town, the headquarters of the 85th infantry regiment.